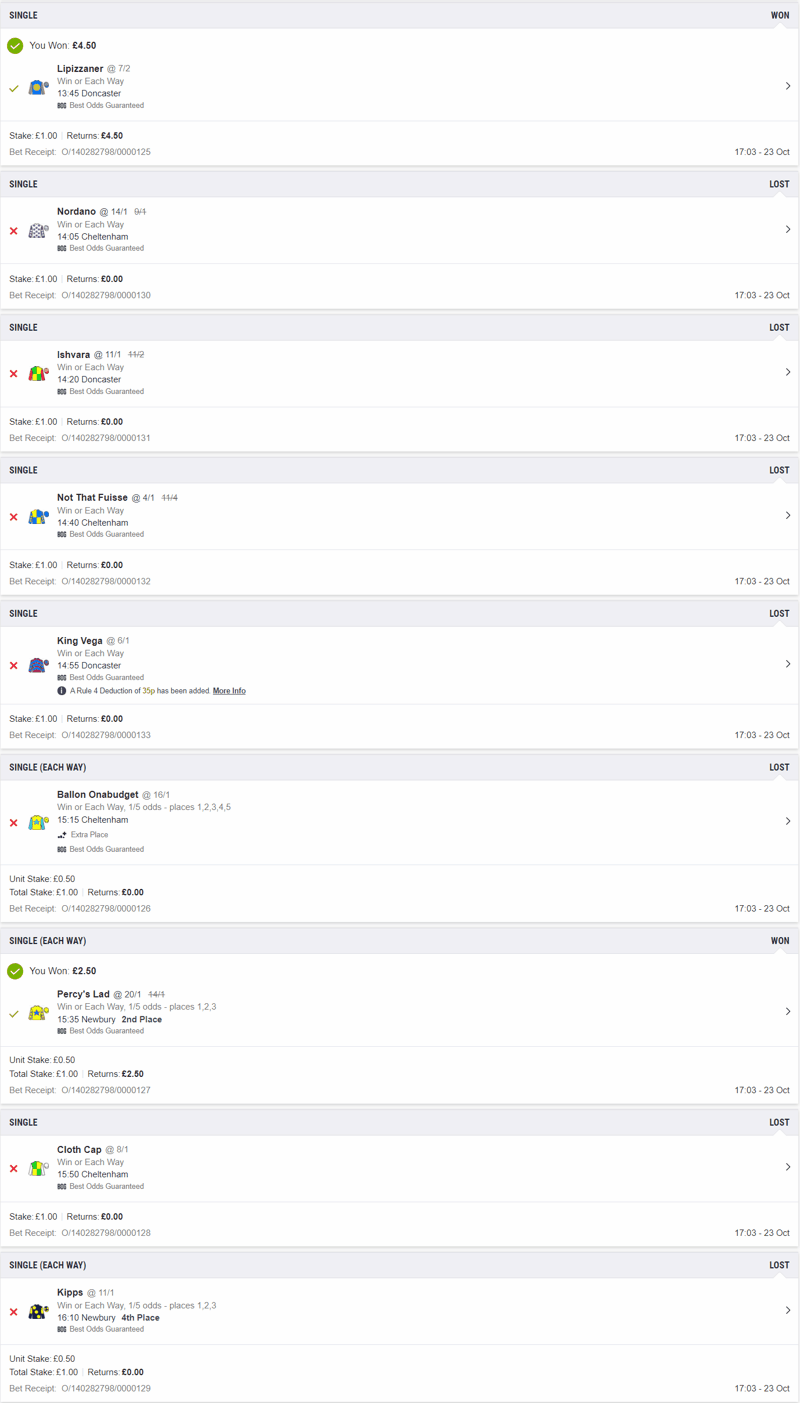 This week’s Saturday offering from ITV Racing is a mixture of flat and jumps racing. The National Hunt action comes from Cheltenham which is hosting the second day of its first meeting of the new season. Some quality hurdlers and chasers will be in action at Prestbury Park but there is also a lot to look forward to from the flat cards at Newbury and Doncaster including the Group 1 Vertem Futurity Stakes.

With very different races to enjoy, we’ve sifted through the day’s action to pick out our best Saturday racing tips, some of which are available at very tasty odds indeed.

It has been a very different season on the flat for a number of different reasons. One of the results of all the strangeness is that there is no standout juvenile star, as there was last year with Pinatubo sweeping all before him. Owners and trainers who had high hopes for certain horses have had to accept that things are unlikely to go to plan. That is even the case with the mightly Ballydoyle operation who believed that Lipizzaner would prove to be one of their best two year olds. Unfortunately, it has not panned out as they would have liked for Lipizzaner but he should at least be able to end the season on a high.

Lipizzaner returned from a mid-season break to lose his maiden tag at the fourth time of asking. He’s failed to win subsequently but can be forgiven for not quite being up to the standard required in the Middle Park Stakes. He looked to have run into a good one in A Case Of You last time out in a Group 3 at the Curragh. He will need something approaching his best run of the season to get the better of the likes of Zamaani and Just Frank and he can do just that to score at odds of 3/1.

Saturday’s racing at Cheltenham begins with an interesting 2m½f hurdle for four year olds. Each of the seven runners in the field is still at the early stages of their careers in National Hunt racing but they have all shown glimpses of some strong form so far. Allmankind arguably has the strongest form to his name. He finished third in the Triumph Hurdle when last seen back in March but it is a horse who wasn’t chanced at the Cheltenham 2020 who catches the eye at a bigger price.

It looked like all systems go for Nordano to head to Cheltenham after he beat 14 rivals in a strong hurdle at Ascot in February. Things didn’t pan out for Neil King’s charge though and he wasn’t seen again until making his return a few weeks ago in a flat race at Pontefract. Given his absence from the track the way that he weakened in the closing stages that day was to be expected but he looked in good shape for most of the way round. He is entitled to come on tremendously from that run and although this is a step up in class against some very good competitors, this hardy, likeable type should give each way backers a good run for their money at a fine price of 8/1.

We saw the favourites have a very tough time of it at Ascot last weekend. Will that trend continue in the last knockings of the flat racing season? If so, then Mighty Spirit could be in trouble in the Vertem Very Different Stockbrokers Handicap. Richard Fahey’s three year old is already a fairly weak favourite for this sprint handicap and you would have to say there are more appealing options at the prices.

The one who really stands out is Ishvara at odds of 5/1. That price is a lot shorter than the 18/1 available about Robert Cowell’s three year old when last seen in a handicap at Leicester. She may have been unfancied that day but ran with real credit to claim second place on the sort of heavy ground that she relishes. Whilst she will have to cope with better underfoot conditions at Doncaster, Ishvara is still capable of putting in a very strong performance and bookend her season with a pair of wins.

Cheltenham
Not That Fuisse
11/4

The first ITV race from Cheltenham comes in the form of the Best Odds At Matchbook Novices’ Chase. This middle-distance contest has been won by some good horses over the years and we have a small but select field ready for this year’s renewal with the four competitors covered by just nine pounds in the official ratings.

Not That Fuisse has the third highest rating of these currently but it may be a different story come the end of the season. Dan Skelton’s seven year old began his second season as a novice chaser at Perth a month ago with a performance that suggested much better things may well be around the corner. Having looked a little awkward at times over the bigger obstacles, his jumping was fluid and he never looked in trouble. He will get similar ground at Cheltenham to that which seemed to suit him so well at Perth and he looks ready to kick on and earn a second chasing win at odds of 5/2.

The Vertem Futurity Trophy has long been a highly important race for two year olds right at the end of the flat racing season. Its reputation was enhanced even further this year when Kameko followed up his victory in the 2019 renewal with his success in the 2,000 Guineas in June. Last year’s race was the first Group 1 to be held on the all-weather after the original running at Doncaster was postponed due to a waterlogged course. But there will be no such issues on Saturday and a quality field will head to Town Moor.

Wembley tops the betting after back-to-back second place finishes in Group 1 races. His form in the National Stakes and the Dewhurst Stakes looks the strongest of anything in the race and the Aidan O’Brien-trained colt is once again partnered by Ryan Moore so he will be very tough to beat. If any of them are going to get the better of the favourite than it is King Vega who is appealing at a price of 11/2.

The obvious issue for King Vega is that he is still a maiden. Don’t let that fact fool you into thinking that he has not given some very good performances in defeat though. Indeed, he may well have beaten the more experienced Etonian in the Solario Stakes last time out were he not denied room by that horse in the closing straight. Kameko was second in the Solario last year and Andrew Balding has every chance of another well-bred two year old kicking on and winning the Vertem Futurity Trophy for him.

This is the sort of competitive handicap hurdle that racing fans really want to see at a course like Cheltenham. 18 runners are set to compete in this edition of the Pertemps Network Handicap Hurdle and you can make a case for any number of them.

If the bookies’ odds prove correct then you will be able to throw a blanket over the top five. Each of Neville’s Cross, Flinck, Honest Vic, I’d Better Go Now and Tobefair are available at odds of between 13/2 and 8/1. Narrow favouritism goes to Neville’s Cross who has already won twice this season.

There are genuine contenders outside of those five though including Ballon Onabudget who can be backed at a chunky price of 16/1. Last season was a wipe-out for the Jonathan Burke-trained seven year old when he fell on his first start over fences but he returned this summer in some challenging staying hurdles which brought out some fine runs from him. Ballon Onabudget was a winner last time out on good ground at Newton Abbot and has enough about him to claim a place at a generous price.

We have a fairly solid favourite for the Molson Coors Beverage Company Stakes in Laneqash. Roger Varian and Jim Crowley have teamed up to good effect already this season and the best price you can get on them securing another big win is evens. He was a very good winner of his maiden first time out but then was found wanting a little bit when he came under pressure in a Listed race last time out so it may be worth taking Laneqash on here.

The two to consider having on board against the field are Percy’s Lad (12/1) and Autumn Twilight (25/1). The former has won both of his starts to date including a conditions stakes last time out which earned him a wildcard place in next year’s Derby. He is unlikely to run at Epsom as his stamina doesn’t suggest he would last 1m4f; but this big, imposing colt has every chance of running very well over seven furlongs at this level. Autumn Twilight is the one for each way punters after unexpectedly winning on his debut when holding off a couple of more experienced rivals. A place could certainly be within his capabilities.

You will often see horses who are able to start and finish the National Hunt season strongly but find the going much more difficult over the winter months when the ground tends to get softer. Cloth Cap is one of those good ground horses who has to capitalise whilst he can get better ground and he is well-priced to do just that in this competitive-looking staying handicap.

The current odds of 8/1 about the Jonjo O’Neill-trained eight year old stand out in what should be a cracking race. It would take a very good performance for him in his first run of the campaign to get the better of tough, hardy rivals such as Frodon who is reunited with Bryony Frost and returns to Cheltenham as the bookies’ favourite. There is also a slight concern that this 3m1f trip may be the minimum for Cloth Cap who is a genuine stayer. But you just can’t ignore a horse of his calibre and experience who looks so well treated by a handicap mark of just 136. He is a much better horse than that and should start a successful season with a strong run at Cheltenham.

It is a case of one from the top and one from the bottom for the final ITV race of the day. Raymond Tusk is the bookies’ favourite for this Group 3 and is just a single pound off being the top rated horse in the field (behind Alounak). Richard Hannon’s five year old hasn’t been seen since January but could find that a break is exactly what he needed. He also has good form at Newbury, placing in some big races against top quality opponents and winning his maiden here. He has also has plenty of proven stamina which should make up for any rustiness, which makes him the right favourite.

There will be plenty of punters willing to take Raymond Tusk on. Those doing so should consider the chances of Kipps at a very big price. He is the horse right at the bottom of the rating so, on paper at least, he does have a lot to find to win a Group 3. However, if we have learned anything about Kipps this season it is that he is a model of consistency and always gives his best. He earned his fifth place in six starts in the Old Rowley Cup (arguably the most competitive handicap of the flat season) and will be there or thereabouts on Saturday at a very tempting price of 18/1.